February 14, 2010
My brother encouraged me to watch the South Park episode, "Dancing with Smurfs", and I thought I could give my remarks.

The kid that normally does the morning announcements was brutally murdered in the beginning of the episode. Cartman, one of four characters tries out for the part. He decides to imitate how I view those folks on Fox, especially Glenn Beck.

Cartman goes from just morning announcement with his usual commentary of insulting the sg president on the PA to somehow getting a short video program streamed from his 'studio' looking room of the principal office throughout the school. Cartman continues to be belligerent in the name of "I'm just asking questions. I'm an everyday man" kind of horsecrap. One great example from Cartman was his questioning the president's use of everyone's lunch money asking, "Is Wendy using your lunch money to buy heroin?" in an excited accusatory voice, and answering himself in a more bland tone, "Probably not." Switching back to the accusatory tone, he adds, "But how can we know? *I* don't want my lunch money going to drugs! Who's taking these drugs? What's the point? I'm just asking questions."

I really enjoy when Fox News provides graphs or charts or tables to prove their point and the graphic is very incorrect. In Cartman's announcements, he makes a table of words used to describe the tendency of the sg president. 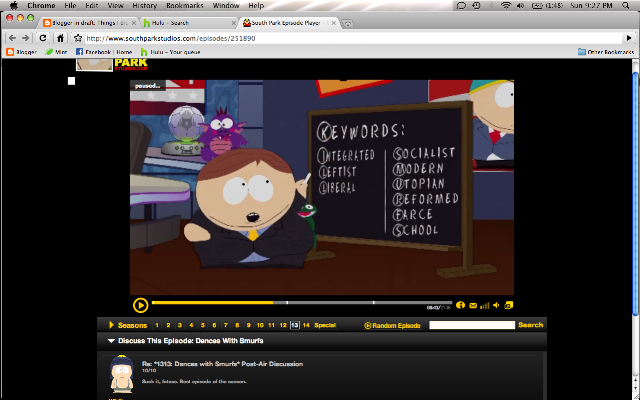 He emphasizes the first letter of all the words used... even the title of the table, so he could easily "prove" that the president wished to kill smurfs.

From there, he wrote a book insulting the sg president graphically, selling it at the school, and then decided to go live with the smurfs. In his time there, he worked picking smurfberries to get acceptance form papa smurf so he could be with smurfette. However, smurfland wasn't at peace as the sg president with an army of bulldozers - although it was really Cartman poorly disguised as the president - massacred smurfland and many smurfs to prove his point that the president was doing a poor job.

Of course, he made money selling his documentary, "Dances with Smurfs" after his book selling was banned at school.

Finally, after much silence, the president decided to speak. She turned Cartman's story around, agreeing with the charges that she wiped out smurfland, but it really was Cartman that enabled the scheme. She put on a sad an apologetic face and had a wonderful statement just dripping with stupid passive aggressiveness. Paraphrased: "We needed the smurfberries to power the school, so we wanted to send someone into the inside to learn their secrets, so when they move on, we can power the school without them. But you (Cartman) gave them the will to stay so we had to do what we had to do. And now, I'm stepping down as student president." Then she talks about her book, "Going Rogue on the Smurfs".

Ah, Palin. Why did McCain ever pick you?

It's sad when I know an ignorant loud person who sugar coats insults and assumes ignorance = confidence...but when they're in the public eye, they just make me want to wretch.