December 16, 2019
More solving problems and going to meetings at work. I went to lunch with two friends to catch up with what's going on in their lives. After work, I went home, changed clothes and went to Stein Mart to pick up a package, and then to the gym. At the gym, I was just tired. Apparently two weeks of daily strength exercises eventually catches up, but I was successful going through my arm and chest routine, and I'll continue the challenge. After all, I'm now more than half way through it!

Speaking of being more than half way through something, it's time for wine and cheese!

It's a Carignan! I have no idea what that is. Let's find out! It smells jammy and of leather. Holy tannins, Batman! However, once you are used to it, it's not bad. It tastes of leather and is a bit smoky. I'm having a tough time figuring out what fruit it has - plum? Raspberry? Maybe it's blackberry. Ok, time to stop guessing and actually read the bottle. "Rich and fruity with ripe, mellow flavors of prune and black cherry.. Sure. It isn't a light wine in the least. And, unless black cherry is very different than cherry, I just don't taste it. I'd agree more for the prune taste, but I forget that they'd go for that - who really wants to drink prune juice? Maybe the cheese will lend some help in letting the black cherry shine. 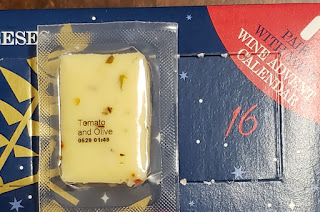 Or maybe the cheese will overpower it. It's one of the strongest cheeses in the pack, along with the Herbed Gouda. The Tomato and Olive Gouda still smells and tastes like pizza to me. It continues to be a mild cheese, flecked with olive and tomato and spices to create a rather strong combination. It still doesn't add anything to the wine, though. The pairing isn't bad, but they don't add to each other. Maybe better luck tomorrow.
Aldi Advent calendar December Gym Challenge