No sleep til documentation

April 30, 2020
I didn't fall asleep until after 1am this morning, which I despise. I always aim to get at least 7 hours of sleep, and hope for 8. But since I needed to deploy at 7am, I had to make sure I was up and relatively awake at 6:50 to start preparing for the deploy. Luckily, it was easy and I only had three tickets. The rest of the was full of documentation and the DBA and I finished the day with documenting over 50 tables or views, over 20 reports, and a few stored procedures.

I was disappointed in my performance for today's mini crossword. 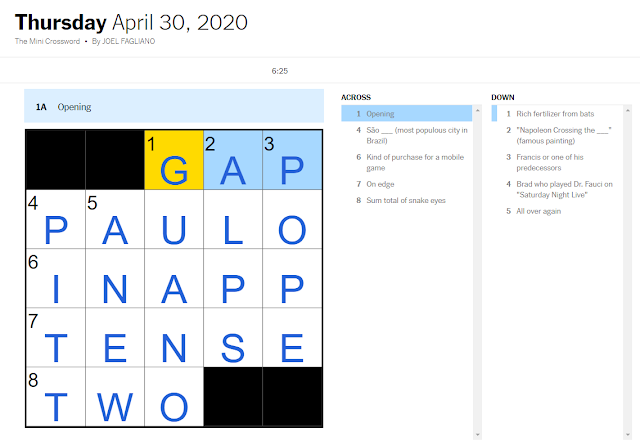 I forgot how to spell Paulo and tried to spell is Paolo, I was attempting to recall what four letter river Napoleon would have crossed, and I was stuck on Francis being either a historical figure (What would Francis Bacon's predecessor be?) and luckily I had watched Pitt's sketch on SNL (which was excellent!) because I had first guessed 'micro' for 6 across. Better luck next time.