April 25, 2020
I was nervous about making this bean soup because the Cajun version of HamBeens 15 Bean Soup mix was just not good, but I like ham and bean soup other times. I feel bad that I ended up throwing out the rest of the cajun version last year.

This time, I stopped before tossing the regular seasoning packet in from my non-cajun HamBeens 15 bean mix, and smelled and tasted the seasoning in the packet. It was terrible! The "maltodextrin and other natural flavors" ingredients list I found about the packet seemed to be true. It was just overly sweet smoke flavor. I declined to use it.

I later found a recipe for ham and bean soup in which the first few directions are "Open the bag of dried beans. If it contained a seasoning packet, throw that out."

The soup was a huge experiment of what I've learned about seasoning, using the Instant Pot, the failure of the Cajun HamBeens 15 beans soup and reading through several ham and bean soup recipes.

So, here is the final result!

And here's the recipe:

Set Instant Pot to Saute, and put in olive oil. Once the pot is Hot, toss in the diced onion, stirring frequently so they don't get burned. After a few minutes, add the garlic and continue to stir frequently for a minute or two, then add the chicken broth, give it all a quick stir, making sure any burned bits are off the bottom, and then add the rest of the ingredients except mushroom, stirring well. After all ingredients are incorporated, put the lid on the Instant Pot and set it to Pressure Cook at High Pressure for 45 minutes*. After the pressure is released naturally (or you get too hungry) open the lid and stir in the mushrooms.

*To be honest, I didn't quite follow those directions. I boiled the rinsed beans for a half hour first, then tossed them in the pot for high pressure cooking for 30 minutes. I had forgotten in my research that I was to throw in the beans as is before soaking or boiling, so I did the quick cook directions of 'rinse, then boil beans in 10 cups of water' for 30 minutes before I remembered that I could have just tossed in the beans after being rinsed.

If I were to do this recipe again, I would double the amount of corn, omit the cup of water, and use 2 tsp each of cumin and red pepper flakes, instead of the full tablespoon of each.

Crossword was fun today!! Didn't even need to check with the Auto Checker. 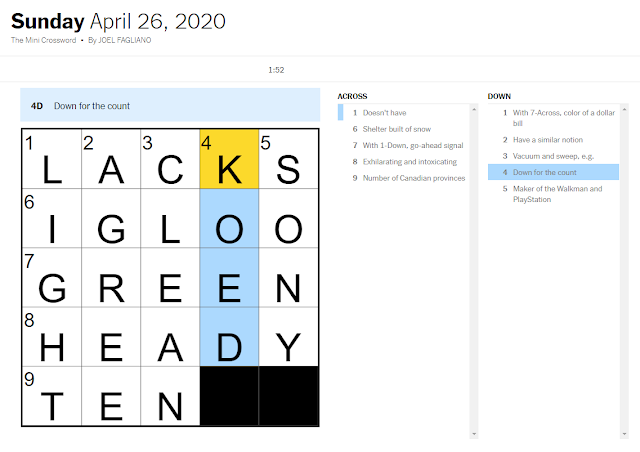