I fell down a rabbit hole

Second - Crossword wasn't great today! I had to stop and think and get a couple of clues from one of my friends. Most of the issues were I thought of nouns for the clue, where it was asking for a verb. Gah! 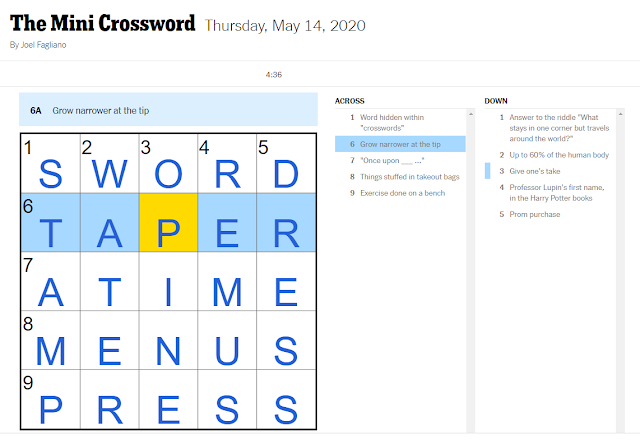 I thought it was pretty cool that there were no black squares, though.

But as I reached for the Twinkie, Deconstructed book, I thought "Oh, what's over on YouTube?"

I... well, I don't want to say that I shouldn't have, because the rabbit hole I fell into was delightful, but it also took up most of my evening. I watched WheezyWaiter's video about quitting caffeine, and I like his videos. He did this No Caffeine Challenge with his wife Chyna and friends Jack and Nataly. Then they mentioned Jack and Nataly are in a band called Pamplamoose, which is a fantastic name for a band (and the French word for 'grapefruit'). I clicked on their linked channel, and it is fantastic!

I'll have to listen to their original songs tomorrow, because it's almost time for bed.