June 13, 2020
The first time I tried baking Hokkaido Milk Bread, I incorporated Active Dry Yeast - like the picture in the recipe - into the dry ingredients of the dough. I mixed in the wet ingredients, and went on my way. As you would guess, it didn't rise. The yeast never activated, and I ended up with a very dense, but still very delicious... cake. Or Shortbread.

This time, I'm going to activate the yeast and add it in as the first wet ingredient and see if that fixes things. Well - it did - but created a new problem. The dough did rise properly! However, it was very wet and sticky. After all, I technically added a quarter cup of water with the yeast that the recipe didn't call for, and with baking you have to be rather exact.

So I turned it out onto my floured surface and added some flour, and did a bit of kneading. It was still sticky and wet. More flour. A bit more kneading. Then, I tossed it back into the greased bowl and searched for "what to do when dough is wet and sticky." The answer is, yes, add flour, but don't knead it after the first rise! If you do, you've ruined it and it won't rise again! Sigh. It indeed had deflated when I kneaded more flour into it.

Ok, do I just toss it out and try again? Do I just continue? Do I wait an hour? I decided to fuss about the (container) garden for a half hour to decide. Magically, as I was working in the garden, the dough was doing its best to rise again. When I came back, it had risen back to its original doubling-at-first-rise volume. I decided to take that as a good sign and continue on. I turned it out again to my flour surface, and the dough was now very springy and soft and pleasant to work with. I cut four (relatively) even pieces and rolled them up to specifications and put them in a loaf pan to further rise another hour. After my walk, it looked good!

I applied a butter wash and preheated the oven. After a half hour, the bread was done! The crust was a bit too dark, so I'll have to decrease the temperature, because the inside was excellent and exactly what I wanted in this bread. Such a delicious bread! I had to stop myself from eating more of it since I hadn't yet had dinner, and I probably shouldn't just have bread. 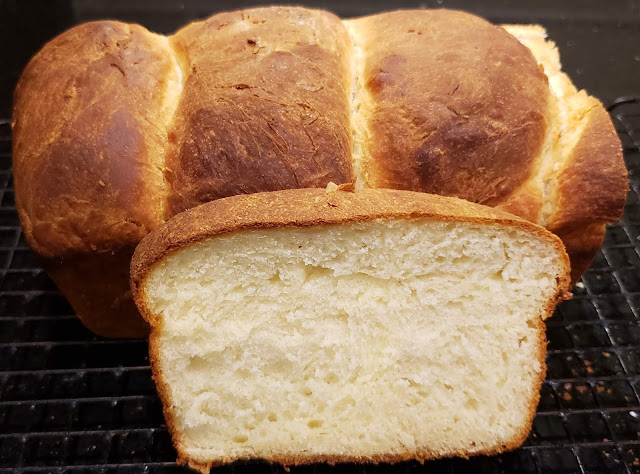