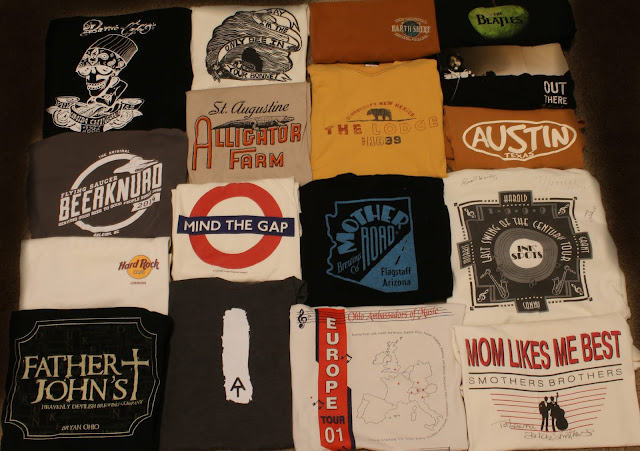 This photo was a bit difficult. At first, I had the tshirts on my dining room table, but I couldn't get them all on the table without getting some of them wrinkled. Also, I couldn't get the tripod high enough to get a top-down view for the camera, so I gave up after several configurations and put the shirts on the floor and smoothed them the best I could. I still had a slight angle because I don't have a tripod with legs that wide, so I took the photo as least-angled as I could.

When I went to edit the photo, the beige carpet just stood out like a sore thumb on the sides, so I learned how to use the Brush tool in Lightroom so I could make the background with the terrible beige-ness a much darker color that almost doesn't register as a thing to be looked at.

The shirts, from top left, going down:

Column 1:
Barrio Cafe in Phoenix, Arizona - gift from my brother Todd in 2014
Flying Saucer in Raleigh, North Carolina; Beerknurd member group - purchased with my friend Sarah in 2014
Hard Rock Cafe in London, England - Purchased it at the Hard Rock in London in 2001
Father John's in Bryan, Ohio - Purchased it last year when visiting with my parents in Ohio

Column 2:
Say I'm the Only Bee In Your Bonnet - Purchased Limited Edition They Might Be Giants t-shirt in 2016
St. Augustine Alligator Farm - gift from my friend Steve when I visited him in 2018 and we went to the Alligator Farm
Mind the Gap - Purchased at one of the shops near a Tube entrance in London England in 2001
Appalachian Trail - gift from my brother Todd in 2018 after the family hiked a part of the AT in North Carolina

Column 4:
Beatles shirt - No, I didn't see the Beatles in concert, but I did see The Fab Four in Sylvania, Ohio. Dad bought this shirt for me during intermission. I don't remember what year they came around, though!
Out There Tour from Paul McCartney - I purchased this in Greensboro, North Carolina where my friend Doug and I saw Paul in 2014
Austin, Texas - I purchased this at The Oasis during a visit to Austin, Texas with my friend Mindy in 2008
Ink Spots - Of course, this isn't the "real" Ink Spots, but there are a ton of Ink Spots-ish bands, and I happened to go to a Last Swing of the Century show with the Ink Spots in 1999.
The Smothers Brothers - I love the Smothers Brothers. I watched every episode of the 1988-1989 run of The Smothers Brothers Comedy Hour, watched several of the episodes I could find of the 1960s run of the Smothers Brothers, listened to all of their albums, and still love watching clips on YouTube. I don't recall what year I got to see the Smothers Brothers - somewhere during high school - but I got to talk to Dick Smothers, and he signed my shirt!