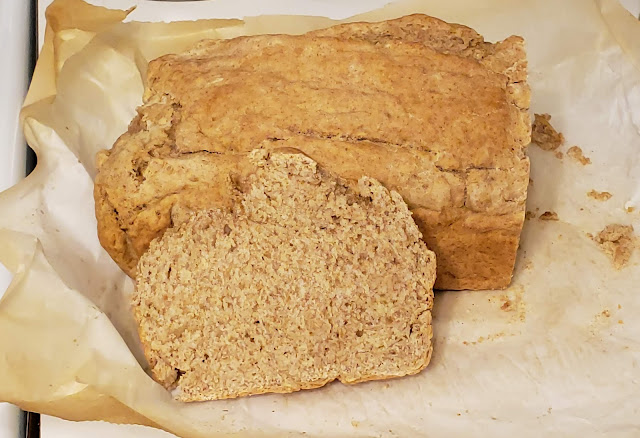 Today, I made bread, but before I made bread, I needed to make the milk that the bread recipe called for.
So I made another round of oatmilk. Only strained it once. Since I'd done this around 4pm, I didn't try it with coffee, but I don't think it'll be much better. Regardless, I'll have it with one cup tomorrow to see.
I used most of the milk I made for the dough. I decided to go for half wheat flour and half white flour, and I followed this recipe:
https://www.recipetineats.com/sandwich-bread-without-yeast-quick-easy/
It's a nice bread, though dense. I'll make it again when I can pay attention - I made some errors (added the milk before combining the dry ingredients) because I was also trying to finish my workday.
After I get tired of my bean soup and chicken Ramen, I'll make some pasta. I have some canned tomatoes and plenty of butter and a small jar of minced garlic and plenty of spices, and found this recipe:
https://spicysouthernkitchen.com/spicy-tomato-butter-sauce/
I might be able to enjoy eating my cooking until the cupboard is bare!