I started the low FODMAP diet on Monday after a weekend of mild to moderate pain for most of the time. As much as I disliked the idea of changing up my normal grocery purchases I also dislike the months of pain, especially the days where I woke up in pain, worked all day in pain, and went to bed with pain. The probiotic that the doctor suggested wasn't helping much, and I decided to start the low FODMAP diet on Monday, even though I hadn't gotten the results from the SIBO test yet.

Monday, I had eggs and ham and went to the store for more low FODMAP foods, like pork tenderloin, rice, quinoa, gluten free bread, Rice Chex, Corn Chex, bell peppers, approved tea, coffee, eggs, carrots, lettuce, and rice noodles. My balsamic vinaigrette from a previous trip already was approved. At least I have salads and eggs and cereal for when I didn't feel like cooking a proper meal.

By Monday night, all my abdominal pain was gone. It was amazing. Around 9pm, I realized I didn't hurt any more. Same thing with Tuesday and Wednesday and most of Thursday. However, with this being a rather low calorie diet, I was getting hungry more frequently despite eating until I felt full. That lead me to not wearing my braces as much as I should! Thursday evening, I ate nachos - corn tortilla chips with canned chicken and cheddar cheese. I notice that the pain came back about three hours after dinner. I realized that the only unusual thing for the dinner was the Tillamook cheese I put on the nachos.  Cheddar cheese should be low FODMAP, however Tillamook prides itself on having more cream than what is the legal requirement in a product, which creates a creamier, meltier cheese and creamier ice cream.

Then I remembered that really terrible week when I kept biting my lip, and I bought myself some Tillamook vanilla ice cream because I was upset that eating hurt and I really wanted to try the ice cream. I ate entirely too much. As in, the half gallon was gone in 4 days. Shockingly, I felt bloated and within a few days, started to have pain and cramping. As I've never had that problem with ice cream before I attributed it to other factors and continued on, until the pain wouldn't stop for a week. I'd go to sleep with the pain and wake up with the pain, all while eating Tillamook ice cream and cheese.

Thursday morning, my doctor called to let me know that my test came back, and I am indeed SIBO positive. She prescribed a two week course of an antibiotic, told me to of course stop the probiotic, and continue with the low FODMAP diet. I picked up the prescription on Thursday after work, and started the first dose that night.

Friday, I had some pain in the evening, but I am unsure if it was due to eating too fast, being hungry, or the SIBO symptoms. However, the possible side effects of the antibiotic is stomach cramping, so who the heck knows. The pain went away, and I was able to sleep without pain, so fine. I'll take it.

Hopefully, things get better permanently, and I won't have to completely swear off food groups, but just keep things in moderation after the elimination portion of the diet has finished. I'll stick with it through the antibiotic and probably one or two weeks after, then start the reintroduction phase.

I can't decide if I should test ice cream or onions first. We'll see what I miss the most by then. (Right now, ice cream is winning.) 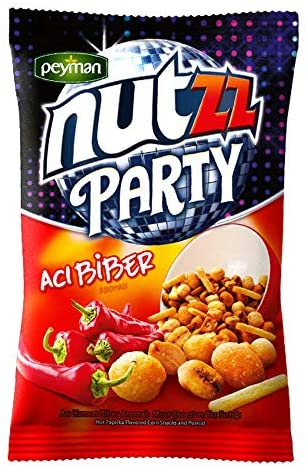 Four snacks left in the box! What a fun present this has been! #1 Nutzz Party I assumed this was peanuts with a spicy flavored mix, and I was pleasantly surprised that it was not only peanuts, but also corn nuts (I didn't look that closely to the package, clearly) which I really like. It was a very tasty mix, and I'd absolutely eat this again! Nuts, popped corn kernels and ball-shaped chips, all covered with herb mix, either cheddar, onion flavored or burning hot! It also has honey and mustard flavor which is a new mix for many Turkish snack lovers. Nutzz comes with a basic snacking kit in small sizes to have it on the go. It tastes like Krispi crackers, what do you think? Rating: 4/5 though I don't think it tastes like Krispi crackers. #2 Kagit Helva The directions state this is best used as a way to make an ice cream sandwich. I happened to have some Tillamook vanilla ice cream in the back of the freezer, neglected due to the whole SIBO thing in 2020. Decided I can carve
Read more