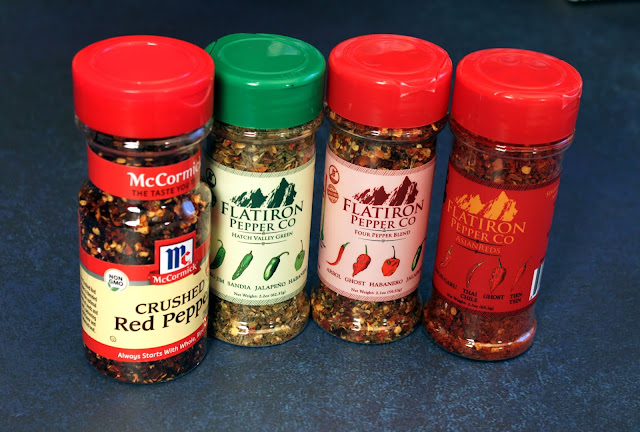 I had some McCormick Crushed Red Pepper in my pantry, and it was starting to get a bit old. Instead of adding a bit of nice heat to my dishes, it smelled a more like chili dust and wouldn't impart much of a kick. Around that time, I started getting advertisements for FlatIron, a company that creates pepper blends to make a more interesting dried pepper blend. I thought I'd try it out, as I'd gotten into hot sauces the year before, learning that there is a lot more into hot sauce than just heat and vinegar. I purchased a pack - one container of Asian red peppers, one container of Hatch Green Chile, and one container of their Four Pepper Blend, that should have taken the place of the boring old McCormick Crushed Red Pepper dust sitting in the pantry.

I was making some Asian recipe and opened up the container of Asian Reds to smell the spice blend. The spice level nearly took my head off! Well, no matter, it's supposed to be a hot pepper blend. I tossed it in but found the blend to be odd, and not the complementary spice I was wanting. It seemed to be entirely too sweet.

No matter, I have two other containers to try! I put a small amount of the Four Pepper Blend on a breakfast sausage while it was heating up in the pan. The smell of the blend cooking in the pan along with the sausage caused me to swiftly exit the kitchen while I coughed and sought out a tissue for my eyes and nose. While the sausage tasted fine with the pepper flakes when all was said and done, I would have wanted to use fewer, which seemed to be the opposite of what I was going for - I wanted more depth of flavor and richness, not just something to use sparingly because it is just hot, and the only good thing this is for is making things hot.

The Hatch Green Chile had the most promise. I like Hatch chiles, and I like Jalapenos, and I'm fine with Habaneros, which meant this should be an excellent blend. Heat, but with character. Or so I though. I started cooking a dish I thought would be complementary, opened up the container, smelled the blend, and immediately thought, "I don't want to ruin my dinner with this. It smells strangely bitter, has an odd characteristic, and not the smell I want with my food." I sighed and closed it up and put it back in the pantry.