Book 1: Augie and the Green Knight

I thought I'd start my large three year 'read every book on my bookshelf' project with a rather easy one. I bought Zach Weinersmith's children's book, "Augie and the Green Knight" from Kickstarter in 2015, and figured I'd get around to reading it sometime. Well, the time is now! 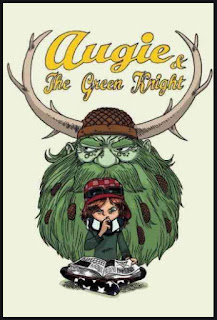 I'd been familiar with Zach's work as a webcomic and owner of Saturday Morning Breakfast Cereal and have purchased some of his other works... which I also haven't read. At least I'm consistent!

Augie and The Green Knight is a delightful story about Augie's travels with the Green Knight as she attempts to bring order and civilized manners to the knight. It is a very delightful read, and had me laughing out loud between excellently placed pop culture references and Augie's unique perspective. I would highly recommend it for readers aged 10 and up. Some of the words would likely be a little difficult for some younger children, but I would hope it would encourage them to look them up, or ask their parent/guardian/etc. And, by 10 and up, I firmly believe that adults that enjoy silly humor would be highly entertained, as well! My only complaint is around the ending. While Augie goes through trials and learns more, I expected a different character conclusion and was very disappointed. I was going along for the ride just fine and having a good time, but I really disliked how Weinersmith wrapped up the story. I'm wondering if others feel the same thing, or if I'm an outlier, expecting something different from the main character in the end. I'll assume that it was just me, being particularly unfair about the ending, because the rest of the book is excellent!