Day #93: Searching for a title

December 19, 2009
Couldn't think of a good title. sorry. Read Life of Pi to page 101, and watched entirely too much of The Office. Going to dry laundry and eat some stew. Tomorrow: Church Spaghetti with "meat"balls... (balls consist of kidney beans and TVP) Goodnight! «Laura»
Post a Comment
Read more 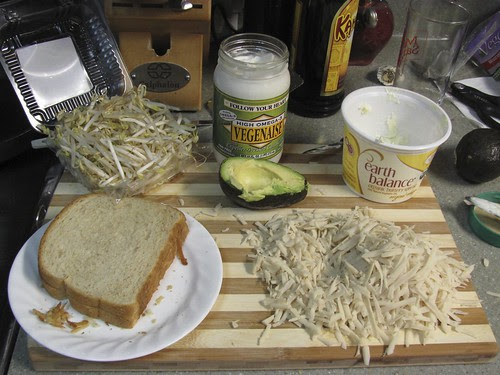 IMG_0776 , originally uploaded by shutterfli . I didn't really crash a potluck my former team was having - I brought cookies! We had a great time eating and laughing and playing Apples to Apples. After work, I went home and made vegan avocado grilled cheese sandwiches with bean sprouts. Delicious! To get from the top picture to the bottom picture you need: 2 piece of bread 1 avocado Vegan mayonnaise Vegan butter Vegan cheese bean sprouts I threw a pat of butter in a pan and heated it up while I grated the cheese (was in a block). I spread some mayonnaise on a piece of bread, threw some cheese on it and microwaved it for 30 seconds. While I was waiting for the microwave to do its thing, I cut the avocado in half lengthwise, removed the pit, scooped out the deliciousness inside and put that on a piece of bread which I tossed in the warmed pan. Took microwaved bread out of microwave, put bean sprouts on the bread/mayo/cheese and flipped it upside down onto the pan-cooked bread with av
Post a Comment
Read more

December 16, 2009
Today I baked more vegan cookies because I'm crashing another potluck at work tomorrow. This weekend, I plan on making avocado grilled cheese with vegan cheese and butter (my own recipe), as well as spaghetti and bean balls, from Veganomicon. I did read up to page 39 in Life of Pi yesterday as well as got my tires inflated. I'll go find more soy ice cream, as it was really good! Tomorrow: Avocado grilled cheese Life of Pi Now: Sleeeeeeep! «Laura»
Post a Comment
Read more

December 15, 2009
I'm posting now because the internet has been down in my house for 24 hours, and that's a rare occurence. I'd rather get this post out a little earlier instead of worrying about the internet connection when I get home. I tried Tofutti soy ice cream (chocolate) and it was way better than ricemilk ice cream. I'm going to find another brand of soy ice cream and see if that's even better (I know most grocers stock the So Delicious brand). After I get out of work, I'm going to head to the Honda dealer to get my tires checked, go purchase soy ice cream, then head home to read a few (probably 50 or so) pages of "Life of Pi" which is the book that won the poll for January's book in the Toledo Book Club. Tomorrow, I plan on reading more "Life of Pi" and relaxing. I realized that I'm most relaxed when I'm reading and when I'm cooking. Interesting! Catch you later! {Laura}
Post a Comment
Read more

December 14, 2009
Today was super fun! I visited with my great uncle (He's 95!) and watched my nephew sing several Christmas songs along with other kindergarteners. The nephew did well and the group of kids were rather impressive knowing all the words to the songs. I made black bean soup for dinner and enough to have lunch for the next three days. The soup: 1 red onion, minced 2 cloved garlic, pressed 2 14oz cans of black beans, drained 2 cups of vegetable stock 1 1/2 cups water 2 teaspoons cumin 1 teaspoon chili garlic sauce Heat a stock pot with a bit of oil and add the onions and garlic. Cook for at least 3 minutes, but I prefer to cook them longer - I think I cooked them for 7 minutes. Add in the water and cook around a minute before adding everything else. When all the rest of the ingredients are in, turn the heat up to high until the soup boils, then turn the heat to medium-low. Let soup simmer for at least 20 minutes. Add salt or pepper if desired. And it was very good! {Laur
Post a Comment
Read more

December 13, 2009
I bought a pint of chocolate ricemilk ice cream, and it's good! I think I'll look around for different kinds of vegan ice cream - coconut ice cream, hemp ice cream, almond ice cream... there are options to discover! I am going to cook vegan meals in the next few weeks - I enjoy cooking and don't care if I have to pay attention to the ingredients.  However, when I'm eating out, I don't want to pay as much attention or if I'm offered food from others, I don't want to decline just because the item might have eggs or dairy milk in it. I'll let you know what I cook! «Laura»
2 comments
Read more
More posts