Chronicles of Prydain, book 3, The Castle of Llyr; Visit with friends

August 01, 2020
I started book 3 of the series I'm reading by Lloyd Alexander. It's the "romantic" story, mentioned by the author in his notes. I have been rolling my eyes more at this book - the protagonist just doesn't understand why he feels so strange around the main female character! It's still well written, and I'm enjoying how the author explains in his note the difference in this book over the last two. This evening, I did some social distance visiting, on a friend's back porch. The storm that swept in the area cooled things down about 15 degrees and made it very pleasant to be outside. I visited for over three hours and two bottles of wine, enjoying varied conversation topics, like classic movies or the difference between intelligence and wisdom. I'm looking forward to visiting with them again!
Post a Comment
Read more

July 31, 2020
I failed another test - I only put in 10 questions, but I answered 6 of the correctly - not the 8 I needed to pass. I'm thinking I'll just take a larger practice test every day next week as the bank of questions is only 153 and eventually I'll get used to how the questions are worded (rather strangely) and more information on indexes and other concepts I'm not proficient enough in. I'm a little disappointed on how poorly I'm doing, but also with how terrible the website UI is for taking a test! It's nice to have it all online so I'm not beholden to just one computer, but I'd prefer a better laid out test. I'll still work through this one, then find a reputable test dump site so I have the best chance to pass in late August.
Post a Comment
Read more

The Black Cauldron, Book 2 in the Chronicles of Prydain by Lloyd Alexander

July 30, 2020
This is has been a fun series thus far! The teenaged protagonist is looking to do interesting things, like being an explorer and warrior, and has a changing quest but a familiar band with him across the two books. We find this time a very disagreeable youth who stands in as the main antagonist, who lies, insults and harms, but has occasional glimmers of hope when he does the right thing - but when it suits him so. I'm looking forward to reading the full protagonist character arc, as he is showing signs of maturity and a desire to treat others fairly - even those that do not extend the same to him. I'm not sure I would have been too kind to the antagonist in the same way. However, we all have character flaws, and one of mine is not extending a lot of grace to those I feel are acting appropriately. I guess you can learn something from children's books. I'm looking forward to reading book 3 over the weekend!
Post a Comment
Read more

Better - at least I passed this time! I only did 15 questions and checked a few answers. I think I'll have to just start small like I did for 70-461 and move up. I also read the rest of Book 2 of the series by Lloyd Alexander, and will post my review of that one tomorrow.
Post a Comment
Read more 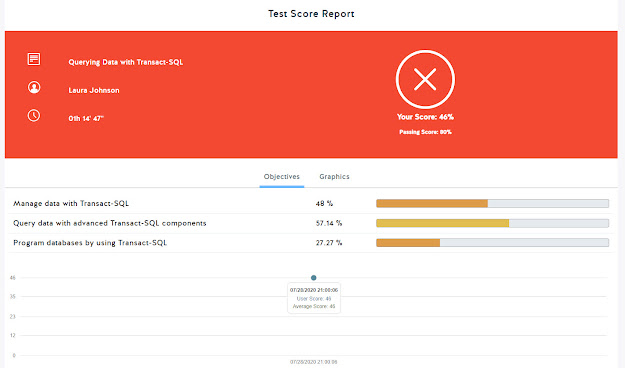 I am exhausted, and I failed miserably. The Mindhub 70-761 test is wildly different, with many new questions. I didn't even get half of them right, and I honestly tried! I'll try again after reviewing all of the wrong answers. I figured I'd fail, just... not this badly! Bit of a disappointment, but better to find out this way rather than in the exam center!
Post a Comment
Read more

SQL purchased but no test today

July 27, 2020
I decided to take an evening off and instead did some crosswords, talked to a few friends, and read the first two chapters of the second book, The Black Cauldron, of the series I started a couple of weeks ago. I have a lot of books I'd like to read, and it would likely be better to read for fun from 9pm until bed instead of YouTube or Reddit. I enjoyed the first chapter - the last chapter of the first book had the protagonist, a teenager, longing for home and simple tasks and tired of being an explorer and warrior. The first chapter of the second book, he's already complaining about his menial tasks! I had a good laugh at that. Teenagers.  Tomorrow, I'll fired up the new practice test. I was a little disappointed at the number of people who pointed out the practice test included a few errors, so the test taker was marked wrong when they had selected the correct answer. As it's online, hopefully Microsoft has already corrected those!
Post a Comment
Read more

I keep forgetting to read the chapter on Views, and it shows. I'm good at remembering what I picked, and what the correct answer was, but which one is which when I take the test seems to be the problem! I'm happy that I continue to pass the tests and tomorrow I'll buy the 761 practice test material and start on that tomorrow evening. I expect to fail that for the first few times, as I have little knowledge with the new parts of 2016 vs 2012 SQL Server, but it'll still be a good start! The Pumpernickel bread continues to be excellent! Shame the bakery is at least 30 minutes away - the loaf was only $5.75 and I'd buy their stuff all the time!
Post a Comment
Read more
More posts