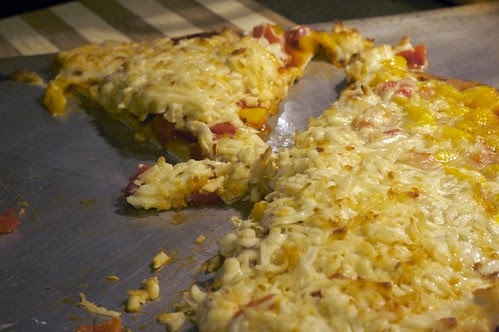 IMG_1502 , originally uploaded by shutterfli . Vegan eatings: Breakfast: 3 (or 5) chocolate chip cookies leftover stew Lunch: Mustard pretzels Dinner: Vegan pizza The second try of pizza was wonderfully successful! I loved it - tasted just like pizza! I grated the "cheese" - I think it was better than having it sliced. I went Christmas shopping with my mother and we bought almost all of the gifts on our lists. It's always nice to have a successful shopping day, even if I have to sacrifice a real lunch to do it! Tomorrow, I'll be heading to church, but I'm not sure what else I'll do. Eat vegan leftovers, certainly. Maybe play some piano! Right now, sleep! «Laura»
Post a Comment
Read more 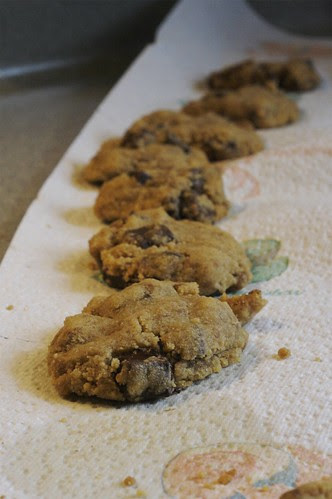 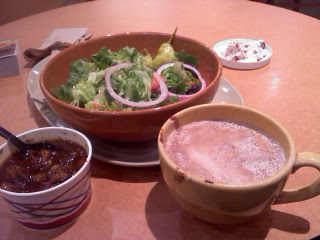 1203091845 , originally uploaded by shutterfli . Vegan eatings: Breakfast: 3 clementines Lunch: Chipotle Stew (Still as amazingly awesome as the first time!) Delicious veganness for dinner!! (see photo at top) Greek salad Artichoke and tomato and mushroom soup Hot chocolate with soy milk. the clerk forgot to not put whipped cream on it....that's fine, I got a spoon and disposed of the cream into my soup lid. I looked around the Toledo vicinity today to see where I could purchase vegan cheese. I thought I found it in Meijer: Veggie slices! Next to the tofu! But it has a milk protein in the ingredients. I sadly put it back and went to Anderson's. No luck there. I was surprised, I thought Anderson's had EVERYTHING! I called Wal-Mart, Kroger, Giant Eagle, Schorlings, Bassett's Health Store, Churchills, Super Churchills, Reddy Food-N-Spices, Target, Aldi's, then I finally found Claudia's! They even had more than one brand of vegan cheese! I was so excited! I just fin
Post a Comment
Read more

Day #76: Done with Julie and Julia and now I'm onto Isa

December 01, 2009
I'm sure my French is incorrect in the title of this post. Vegan eatings for today: Breakfast: Tea Lunch: Chipotle, corn and black bean stew (leftovers - and just as wonderfully tasty as when it was made originally!) 4 clementines Dinner: Stir fry consisting of:  --White rice  --spinach  --mushrooms  --bamboo shoots  --water chestnuts  --pea pods  --garlic powder  --curry powder  --onion powder  --salt  --pepper Dessert:  --hot chocolate, made with soy milk. So far, my taste buds don't think that this vegan food is like a death march to blandness. It's been quite good! Next recipes will be spinach and chickpea curry, and chocolate chip cookies. I found one brand of butter that is vegan at Meijer! (No vegan butter at Kroger.) Yay for Willow Run! I'm considering dropping this daily blog back to a weekly blog and starting a music composition blog and a cooking blog. I'm going to see how much cooking and writing and all I do during the Chri
Post a Comment
Read more 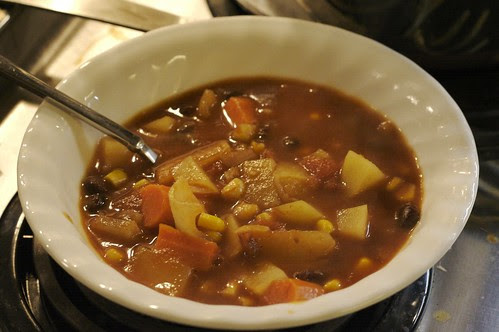 Day #73: Julie and Julia and Laura

November 29, 2009
I'm really enjoying reading "Julie and Julia" by Julie Powell.  She's a very entertaining writer! I'm currently on page 137 of 362, and I need to have it finished by Thursday at 7pm. I'm sure I can get it done. I enjoyed church with Kassie and Leo! We went to the 10:45 service, and it was packed! I'd like to try a different service or at least get to this service earlier than we did. I'm really enjoying the Cedar Creek atmosphere and I'd like to give it a try. Of course, it's always easier to go to a new place with a friend as opposed to just by yourself. It's also nice to have a friend that knows where she's going! (Thanks for making sure I don't get lost, Kassie) The guacamole was delicious! More than delicious! I was trying to get every bit of guac from the bowl. I didn't visit my uncle, but I will do that tomorrow. Right now, I'm off to bed!
Post a Comment
Read more
More posts