A crossword and Twinkie, Deconstructed chapters 1 and 2 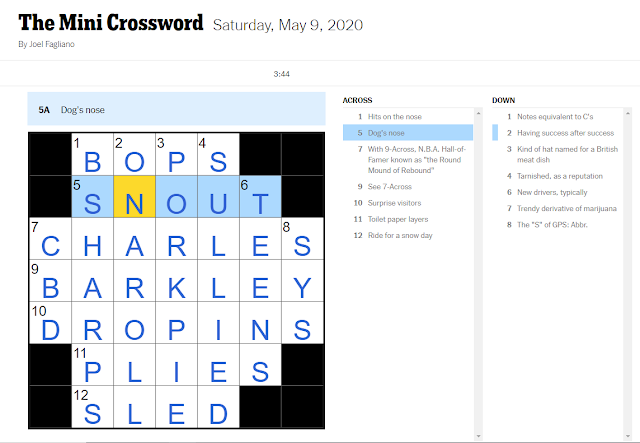 The crossword was a bit larger than usual, but I was okay with my completion time. I read the first two chapters of Twinkie, Deconstructed. Chapter one discussed why he was interested in starting a project like this - to figure out where all the ingredients of processed food come from, and chapter two was about wheat, the first ingredient in Twinkies. I'm always surprised at the amount of different types of wheat. There's hard white, soft white, hard red winter, hard red spring, soft red winter and durum. The different between these six are mostly about the protein - more protein, the more elastic the dough will be. While this link is great for discussing the different wheat flours: https://dontwastethecrumbs.com/the-different-types-of-wheat-and-what-theyre-used-for/ This link goes beyond wheat to consider other types of flours as well: https://www.thespruceeats.com/types-of-wheat-flour-3050534 I know that OYO whiskey is made from Ohio soft red winter wheat. Als
Post a Comment
Read more

Two crosswords while I might have said cross words 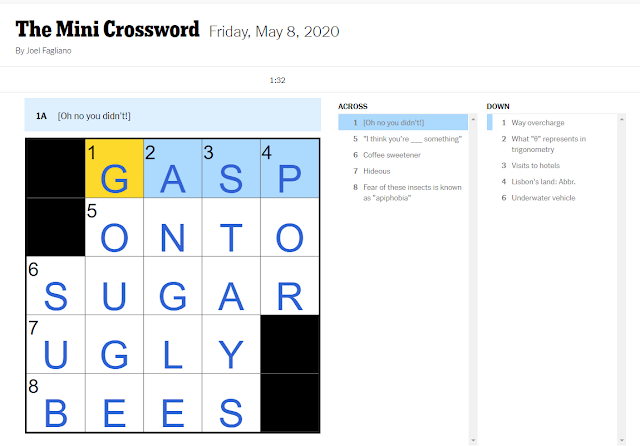 I'm pleased with my performance for both crosswords, though I grumbled and complained about the clues for the bigger puzzle. But I did get the apartment cleaned and spent time on photography and took a 2 mile walk. And now, I'll go read the first chapter of Twinkie, Deconstructed.
Post a Comment
Read more 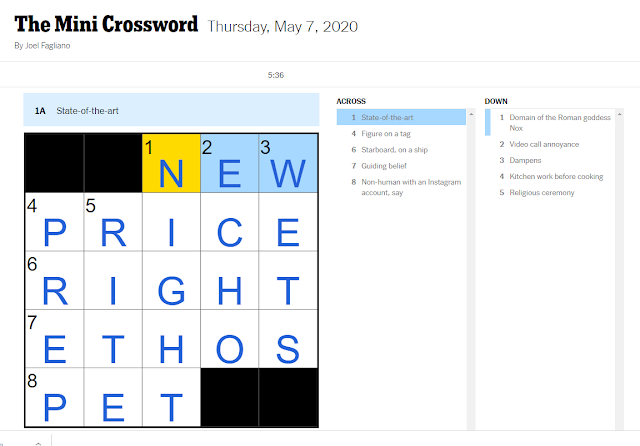 Instead of crushing the crossword, it crushed me. I had to have a friend of mine help. I usually get at least half the clues on the first pass through, but I got none. None of the clues!! State of the art. Um, modern? Art? I don't know, pass. Figure on a tag. A shirt size tag? Large? Nope. Small? Nope. Uh... is it a sizing number, like Eight? No. Ugh, ok, pass. Starboard, on a ship. I don't know what starboard means. I know there's port and starboard and I don't know what they mean. Pass. Guiding belief. Religion doesn't fit. Church doesn't fit. Now all I can think of is "Light" from that soap opera grandma would always watch. Pass. Non-human with an Instagram account. Oh, a bot! Nope. Uh... NPC? No. I.. don't know. Pass. Wow. An empty board after the first sweep. Ok, let's try the down clues. Domain of the Roman Goddess Nox. No idea. I never paid attention to the Greek or Roman gods or goddesses in school. No clue, pass.
Post a Comment
Read more 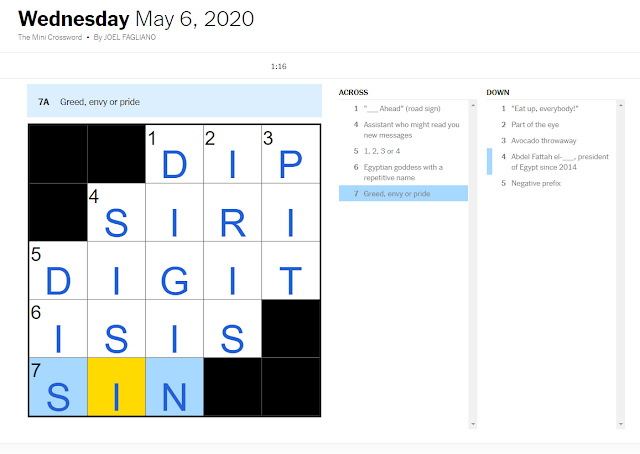 I was pleased to have a crossword that I didn't have to guess any of the words, and the puzzle was solved in less than a minute and a half! I ended up spending my evening taking photos for practice, playing games, cooking brown rice for some fried rice tomorrow, and talking with one of my friends for almost 2 hours. I also watched How to Pulverize Corn and How to Cook Pulverized Corn and then  How to make Ash Cakes  from the ever entertaining James Townsends. So, even though I found Twinkie, Deconstructed and saw the first chapter is not too long, I won't be reading tonight. I'll make sure to get to it tomorrow.
Post a Comment
Read more

Another crossword puzzle crushed, but the noisy bass is back 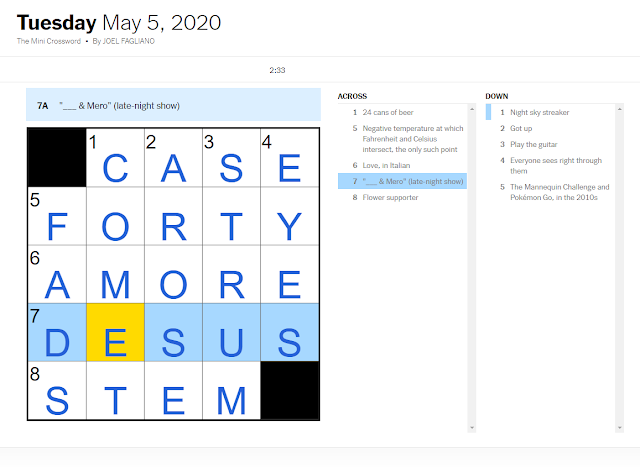 After five weeks of quiet, my neighbors have their bass loud enough that I can hear it over my music. Instead of making a fuss since I'm heading to bed in about an hour, I'll just run my noisy dishwasher on the longest setting it has to drown out the noise. Hopefully this is just a rare occurrence now. If not, I guess I'll stomp on the floor again - the thing I did in anger because their music was so loud that I could hear the bass drum, bass guitar and snare drum in every room of my apartment, even the back bathroom. I didn't want to do that, but I'd already talked to them and gave them isolation pads. However, I did well on today's mini crossword, though I had to just guess a letter for the intersection of 5 down and 7 across. I was thinking that The Mannequin Challenge, something I haven't heard about, had something to do with Pokeman Go which I know is a mobile game to catch creature. FA_S I wasn't sure how it applied to a mobile game, and 7 across
Post a Comment
Read more 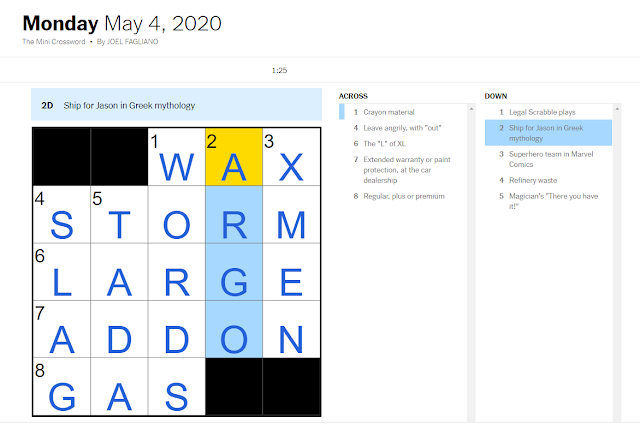 My AC isn't really working. I figured that out early this afternoon when the temperature was 83 outside and the AC couldn't keep up. However, we're still in "Only put in emergency tickets" and tomorrow's high is going to be 59, and the next week will only get up to 72, once. The rest of the week will be in the high 60s. I'll wait until the beginning of next week to put in a ticket. It's comfortable in a tshirt and shorts if the overhead fan is running. I have the lights off to help. Both of the crosswords were done within my arbitrary goal! I was very pleased with that! I expected to read the first chapter of Twinkie, Deconstructed, but instead all I've been doing this evening, after the crosswords and cleaning the kitchen and mopping the floor was done, is look for my copy of the book. I do turn on the lights for the room I'm in to see - I'm not looking for a book in the dark, but I'll have to read chapter 1 tomorrow...
Post a Comment
Read more 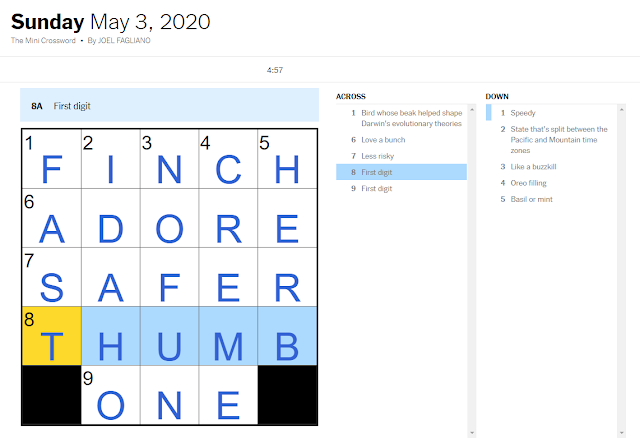 I try to get the mini crossword from the New York Times done in less than 2 minutes, and the Dictionary.com full size crossword done in the stretch goal of less than 30 minutes, which I hadn't been able to do yet. Today's results? Almost 5 minutes! I just couldn't think of Idaho. Listed every western state in my head except for that one, which, when I listed the western states the third time around, I finally got Idaho. After that, I was able to get 1 down and 3 down, but the across clues didn't help me much, surprisingly. However, the Dictionary version was much better. I was really pleased to see that I got it completed well under my 30 minute goal! I also went for a 2 mile walk/run and then found my copy of Twinkie, Deconstructed which I'll be reading a chapter a day for the next couple of weeks.
Post a Comment
Read more
More posts