April 04, 2020
I finished Pete Buttigieg's autobiography today, and really enjoyed the book. He's a kind and genuine person - and it felt like a detailed look into a person who acted like a genuine person when he was running for President. Granted, this was all to paint him in the best light, but it wasn't all successes and easy times for him. I appreciated his deciding to work with his Republican state officials and governor on issues that they both agreed on, instead of being divisive or partisan. I spent most of the day carefully getting rid of the cardboard boxes I've gotten since early March - I set up a staging area where they wouldn't be disturbed and they couldn't disturb anything else. Finished up laundry, finished up a meal plan for the next few weeks, ordered groceries that would be delivered on Monday, and tried to deter some bees that seem intent on thinking my patio end table is a flower. Three bees went around and under it, then flying away. It's covered i
Post a Comment
Read more

Pleasant Day and Plenty of Sleep

April 03, 2020
Individual days are going fast, but weeks are dragging on. Suddenly it's 11:30? But I barely finished breakfast. I've only been home for three weeks? It feels like three years! I finally got enough sleep last night - 9 hours! - which was the first time I got more than 7 hours sleep since Wake County started the stay at home order. I was averaging more like 5 or 6 hours a night, and I know I'm much more functional at 8. I spent most of the day outside on my patio, reading the autobiography of Pete Buttigieg that I borrowed from one of my friends in December, and I felt that I ought to read it and give it back to her when I can see her again in, well, who knows. June or August or 2021. I don't know. It's been a really lovely book and it's well written, and I hope Pete continues to run for and hold public office. Maybe in 40 years, he'll be old enough to clinch the Presidency. I went through my inventory in one of those online databases where you tell it wh
Post a Comment
Read more

Odds and Ends for the end of the workweek 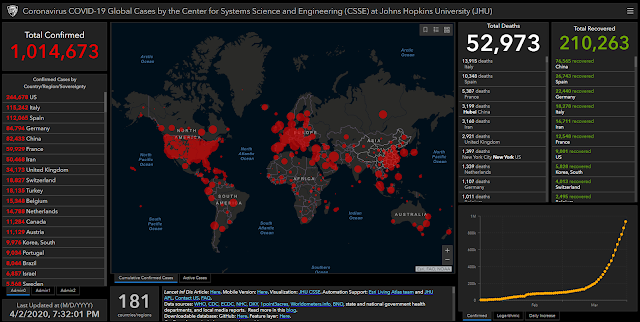 I took inventory of my pantry and found I happen to have a ton of rice and beans, and some frozen ham, frozen pork and frozen shrimp. I'll be doing meal planning this weekend, then ordering some groceries via Instacart for the recipes where I don't have what I need to finish it off. I have a bad habit of making just one 'thing' until that thing is gone, and that can lead to a few nutritionally lopsided days. I really don't need three days straight of Roast Chicken Ramen, and I'll be getting a plan of not only what I can cook, but in what order. In coronavirus news, global cases have gone past 1 million, and if we haven't started flattening the curve, it suggests that by the end of next week...or sooner... we'll have 2 million cases. I'm just staying in my apartment.
Post a Comment
Read more

April 01, 2020
I spent this evening reading Hank Green's book, which was excellent and I highly recommend it. I'm very much looking forward to his sequel, which is slated to hit stores in July of this year. Work flew by as I had a ton of little tasks to complete, and I am starting to inventory what's left in my kitchen and do some meal planning. I forgot to take a walk, so I feel a little groggy and cooped up. I'll make sure to go for a walk to get the mail tomorrow. Coronavirus continues to get worse. I'm glad no one I personally know is affected, but I feel bad for others that can't say the same thing. I hope everyone takes the month of April to just stay home. I'm looking forward to sleep this evening, as I've been not sleeping well for a while.
Post a Comment
Read more

March 31, 2020
Chapter 35, Be an Indistractable Lover. This chapter title is a little uncomfortable, and also, the last chapter in the book. I guess I would have called it Be an Indistractable Sleeper, because it's about setting bedtime routines that allow for fewer distractions in the bedroom, like no phones nor TV, and setting a time in which the distractions will no longer be available. Eyal mentions that many partners go to bed on their phone instead of spending time being with their partners. When he noticed it in his marriage, he and his spouse agreed on some rules, like no TV or phones in the bedroom, and he also bought timer plugs so the computer monitors and router turned off promptly at 10pm. They could override them and switch it back on, but that required climbing around desks and in corners to break the rule they set. When I was married, I didn't have that issue because we almost never went to bed at the same time. I usually went to bed hours before my night owl then-husband, who
Post a Comment
Read more

March 30, 2020
In light of my county and state stay at home orders, this chapter title seems a bit odd. Chapter 34, Spread Social Antibodies Among Friends Eyal discusses how smoking went from 42% usage among adults in 1965 to 16% in 2018. Though he mentioned that regulation had something to do with it, even smoking in homes dropped significantly. Eyal brought up Paul Graham's point that societies tend to develop "social antibodies", defenses against harmful behaviors the way we're hoping the currently COVID-19 infected people recover and create viral antibodies and hopefully donate some of their blood to help others. When you're in a group of friends and one pulls out their phone, it's difficult to then ignore the phone in your pocket. Did you get an email? Text? Anybody at work need you right now? Since they're distracted, you might as well pull out your phone to check what notifications you've received. Eyal suggests fighting that feeling and instead engaging
Post a Comment
Read more

March 29, 2020
I'm skipping a bunch of chapters now, because I just don't find the chapters about businesses and children terribly interesting, and it's my blog, so I can write whatever I'd like. Chapter 27, Fixing distraction is a Test of Company Culture Summary: Don't suffer in silence. A workplace where people can't talk about technology overuse is also one where people keep other important issues (and insights) to themselves. Knowing that your voice matters is essential. Teams that foster psychological safety and facilitate regular open discussions about concerns not only have fewer problems with distraction but also have happier employees and customers. Chapter 28, The Indistractable Workplace Summary: Indistractable organizations like Slack and Boston Consulting Group, foster psychological safety, provide a place for open discussions about concerns, and, most important, have leaders who exemplify the importance of doing focused work. Part 6, How to
Post a Comment
Read more
More posts