A Study on Trees 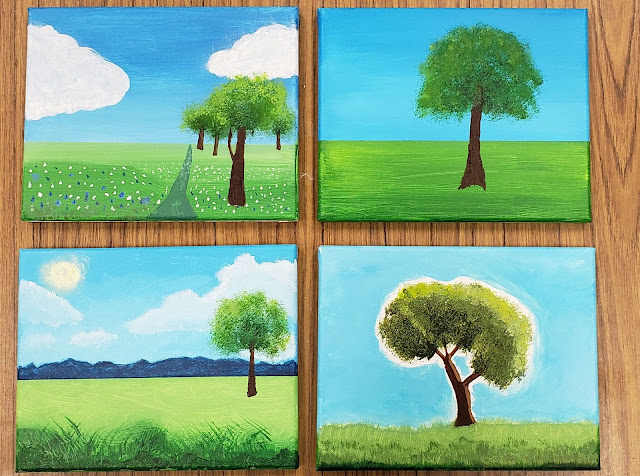 Top left: My attempt to recreate the first painting. Decided to add a hill and path instead of the field to show depth. This week, I tried adding five trees on it, but that didn't work well. The issue was my brush. Despite my lightest touch with my smallest brush, the trunk for the closest tree was entirely too thick, and the other trees weren't that much better. I attempted to fix them with making them longer and changing the third three into being the branch of the next tree. I'd say mixed results there. The leaves aren't bad. I just need smaller brushes or bigger canvases.

Top right: Not done yet, actually. I had to leave before I had the time to put highlights on, so it only has two colors on it. I'm also not liking the shape - too much of a bell shape instead of a round shape. The trunk had similar issues as the top left. It just looks like a cartoon instead. I'll work on that as well as its highlights.

Bottom left: The canvas from week 5, my second attempt on the original 'tree-sun-clouds-field' painting from week 1. I added the tree, and it isn't too bad. The size could be a bit off, but there isn't a clear idea of where the observer would be 'standing'. I like the leaves, though. That worked well.

Bottom right: The original tree attempt from the acrylic painting book last week. I just added another layer of grass and attempted a sky without getting blue on my tree leaves. I like it, though!