May 21, 2020
I captured my cookbooks today during photography practice. I wanted to share the humorous progression I took from vegan to vegetarian to paleo and finally the science of cooking (and history if you count my grandmother's cookbook on the far right.) I also liked the reflection of color on the surface of the table. It gave it more depth, not just some sort of documentary procedure. I've practiced photography every day for nearly two months, and I can say with certainty that I am a better photographer, and I am interested in being even better. I have a ton of photography books that I am excited to read, and I'll start one this weekend and practice with it.

I'm getting into cooking much more as well - the last two months I've cooked Spicy Pineapple Pork, Picadillo, General Tso's Chicken, Ham and Bean Soup, Spicy Honey Chicken, jazzed up some Ramen with vegetables and eggs and sesame oil, made hard boiled eggs in the Instant Pot, and with my skillet, made some Chicken Fried Rice. This long weekend, I'll be making Jalapeno Popper Shredded Chicken and some Hokkaido Milk Bread.

I'm still running and walking and doing glute bridges and stretching, but not as much as I'd like to. I want to get a solid habit like when I went to the gym every day in December. I want to jump into playing piano and writing music as well!

I'm running out of time! My blog posts are getting shorter because I'm exhausted trying to get something finished and then research something for the blog - I haven't gotten back to the Twinkie, Deconstructed book because the chapter I'm on has a lot of information, and I'll have to take it element by element. That requires extra research to make two pages of great information into a blog post that is something different than just repeating what the author, Steve Ettlinger, just wrote down.

With all that said, after 240 posts, I think I'll slow down my blog posting to once or twice a week, where I can share something that I've done and finished all the research for, and wrote competently instead of just "I did some stuff. Here's the crossword I finished."

Today, I did some stuff. Here's the crossword I finished. 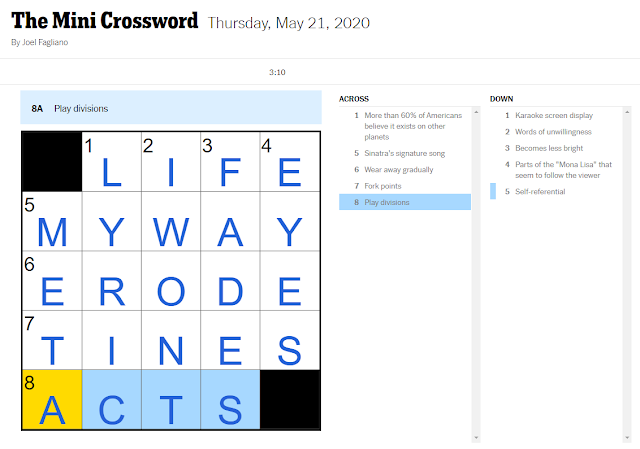