May 30, 2020
I took two hot sauces photos. One in the beginning of my photography practice in early April, and another in late May. It's quite the difference between not only my thought process, but also to fully use what things I have at my disposal.

This one is pretty terrible. I took it with my phone camera, said to myself "You should remove ALL of the items that aren't hot sauce, and you should probably not take the photo on a white surface like your counter." At least I was smart enough to MAKE good photographic decisions, but not smart enough to actually DO them. I overexposed the window because I was too lazy to make a proper background. If I were to retake this photo, I would use a dark table and not overexpose the window, won't add the duplicates, and perhaps not even include all the different hot sauces I have.

More like this one, that I took in late May: 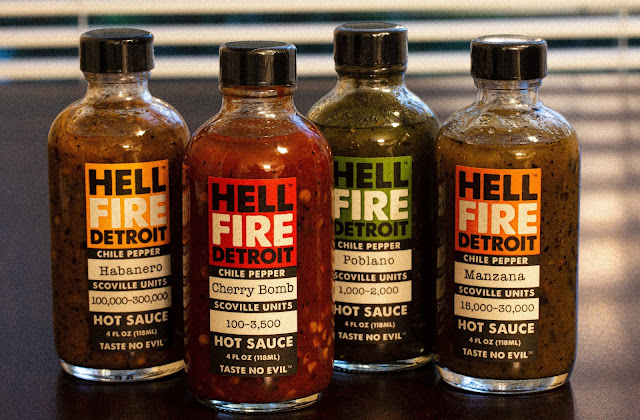 I focused on the collection of Hell Fire Detroit hot sauces I was given for my birthday. I used my real camera and macro lens and tripod so I could have more freedom with exposure and depth of field without fear of a blurry photo. I took these in several different compositions. I started with them inside the box they came in, but the box wasn't interesting, or adding to the sauces. It also threw off my coloring, so I omitted the box and put the sauces on the dark table. I took pictures of the sauces at an angle so there was no wall or window in the back, but it was not easy to read the lettering. I knew I wanted it to be a bit gritty, but very easy to read, as if to be clear that these are hot sauces that will take your head off (thought that Cherry Bomb rated 100 - 3,500 isn't going to do much at all.) I played around with the positioning of the blinds and decided that half open worked the best. I also didn't want the sauces to be exactly in the same line, and wanted to highlight the red and green sauces the most. I really like how the photo turned out, and am looking forward to trying out the sauces, but first I need to finish off more of the sauces in that first picture. (Four of them I've been able to use up already!)