This week, I aimed to continue painting clouds, paint flowers and sun rays on the canvas panel. I also expected the instructor to, you know, instruct, but he didn't. He walked around, talking about the paintings people were doing in a superficial manner, and worked on his two guitarists painting he brought back. He also talked about his dagger striper brush that he uses for grass and leaves and other thin items. 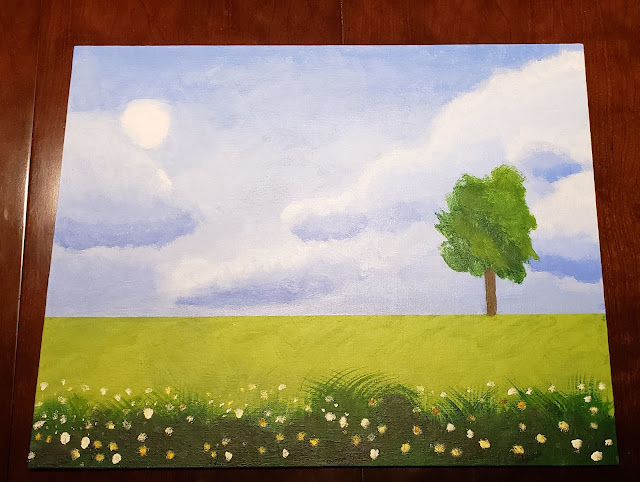 The clouds look pretty good, but my flowers just aren't what I imagined. I didn't have any smaller brush with me, so I dabbed as lightly as I could with what I had. It was still too much. The tree is looking alright, if a little cartoonish. It's very difficult to paint realistically, I'm finding. I tried a few times for sun rays, but ended up removing them, as they didn't look good. Well, it is something, and I still have three weeks yet... as well as two other canvas panels and two canvases that I guess we don't need to use?

The instructor walked to my painting and mentioned the flowers were too uniform and some of them were in a pattern, where nature is nearly never in a pattern and suggested I would want to remove some, then asked if he could show me what he was talking about. Well, sure, I'm here to learn from him, and I expected him to either mime the right brush strokes, or mix the right color to remove the flowers, or identify the flowers that should be removed.

Nope, he took mostly black paint with a little bit of green and painted over a ton of flowers in a very gloppy manner. The paint created big black splotches but also didn't cover the white flowers. It looked terrible, and I was livid. I didn't expect him to remove so many, and also not in such a poor way! He said "Well, it'll dry darker, so your white flowers will eventually get covered up. You might need a few coats." Someone else asked how to paint a tree trunk, and he said, "Oh, like this," and mixed a light brown and painted over my already finished tree trunk, "Just like that!" and walked off to the next person's painting. I immediately started fixing his black gloppy flower removal best I could with a more appropriate green black mixture and attempted to get it to a point where I won't be annoyed the entire week, waiting to fix what he had done.

Next time, I'll fix all the flowers and repaint the tree trunk. Maybe look at how to do sun rays.