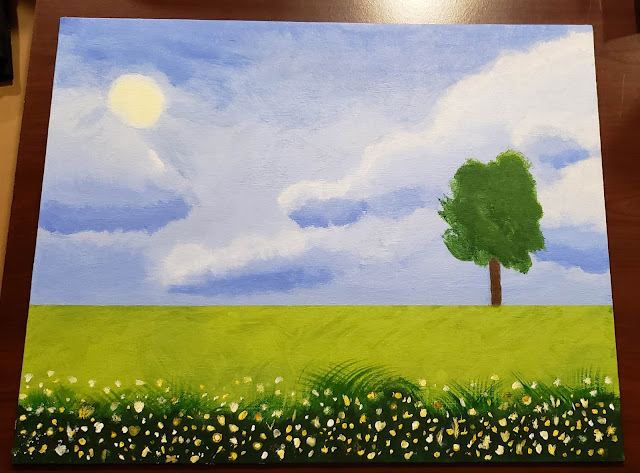 I got a small straight edge brush and watched a few YouTube videos in an attempt to do better flowers. While they are better, I couldn't be consistent enough to make it look like the flowers were receding into the field. Instead, it just looks like a weird wall of flowers. I fixed the tree trunk back to what I wanted, and attempted sun rays (which failed again) and a different way to show sunlight diffusion (which also failed.) Ah well, I don't quite know what to do, and I don't know how to fix it. The instructor noted that my flowers were better, and brought a painting about a cow that a farmer friend of his pointed out was too long. He was going to work on making the cow more realistic while everyone worked on their paintings. He spent most of the time talking about going to the sunflower field at Dorthea Dix Park, and how he likes his dagger striper brush.

I buy an annual membership to the studio so I can go back on the weekends and practice more.