It's the last class. I feel like my flower and tree painting is finished, because I don't know how to fix it. I don't really want to add to my small canvas, because I like it as it is. So, I decided to take my blending exercise paintings and practice painting palm tree silhouettes on them. I brought the other finished paintings with me in case the instructor wanted pictures of the final pieces.

Spoiler alert: He did not.

I went to work, painting palm trees, starting with my least favorite blending painting to my most favorite, in the expectation that I would get better as I progressed. I would paint a few trees, then set the canvas aside to dry while I worked on the next canvas, noting what I wanted to do better, either pressure on the canvas, or thinness of brush strokes, or the multiple ways to paint palm fronds. 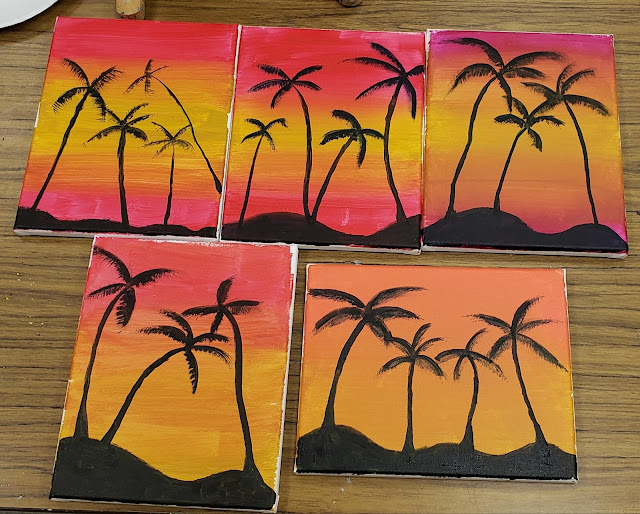 The instructor was confused when he got to my station. "I've heard of people painting a triptych but a five... tych?" I responded, "I'm just practicing. I can throw the worst two away and have a triptych."

He wandered to the next station, I guess not understanding what practice was, mumbling "cinqtych" and "fivetych".

(It's pentaptych, by the way.)

On his next pass through, I was discussing palm fronds with another painter as mine seemed either too wispy or too gloppy and some don't connect to the branch. The instructor said, "I bet you would have good success with a dagger striper brush! I brought mine with me!" and he went to retrieve it. Since I figured this might happen, I quickly laid out the paintings and took a picture. That way if he messed them up, I had a record of what I had actually painted.

He came back with the brush and offered to paint one of the trees, which I accepted. Who cares, now? I brought up the painting I liked the least, and he indeed just painted on one tree, then offered the brush to me to continue painting the rest of the trees in the painting, which I accepted. I wasn't crazy about the changes he made, but they were better than his attempted flower removal from Week 3. I worked on adding more fronds and noticed that it wasn't inherently easy, but when the brushstroke did land where I wanted and the pressure I used was appropriate, it did add to the painting. Sadly, my lack of experience meant a lot of the fronds weren't connecting to the trees. Oh well. I have a lot more time to practice even though this class is ending.

He ended the class the same way he started it. Confusingly, haphazardly, and without structure.