December 11, 2019
Another full day at work. Went to one of my favorite Mexican places for lunch, came back to patch some servers and send out some data, and after work, I went to the gym. I was in a rush, because I had planned to go to have dinner with one of my friends at 6:30, and I was leaving the office at 5:06. Luckily I switch between arm/chest routine and leg/core routine, and my arm/chest routine is shorter and what was planned for today. I went through the routine with probably shorter rest segments than I should have, but was able to finish it up, change and get to the other side of town on time! She and I hadn't been able to visit for more than a month because we were traveling at different times last month, and I was ill, then she wasn't feeling well, but we finally got to chat about the holidays and places we went and things we want to do soon - I agreed to host a board game night next month, so I'll have that on my agenda.

The wine was a malbec. It had a nice strong but pleasing aroma. Smelled of plum and other dark stone fruits, as well as some sweet spice I can't place. The taste was not as heavy as I expected considering how strong the aroma was. It tasted of plum and something similar to cinnamon. A nice wine in the fact that it wasn't light or crisp. The description was "This robust red from Argentina has aromas of ripe black fruits, prune and leather. On the palate is it soft and mellow, with flavors of plum, prune, damson and a touch of licorice." Oh. Licorice. That must have been what I smelled and tasted when I thought there was some sort of sweet spice. 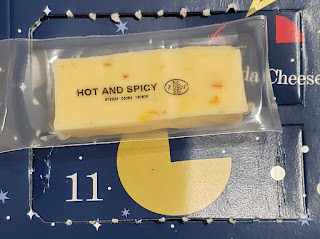 The cheese was that Hot and Spicy Gouda. Good choice! This malbec is on the heavy side, so the cheese paired with it needed to be strong either by the ingredients in the cheese, or the cheese itself. This cheese fit the bill as an appropriate pairing, but didn't really add to the wine. Both were good, and they were good together, but they didn't add to the other - the cheese didn't help something stand out in the wine, and the same goes for the wine. But at least the pairing didn't detract!
Aldi Advent calendar December Gym Challenge